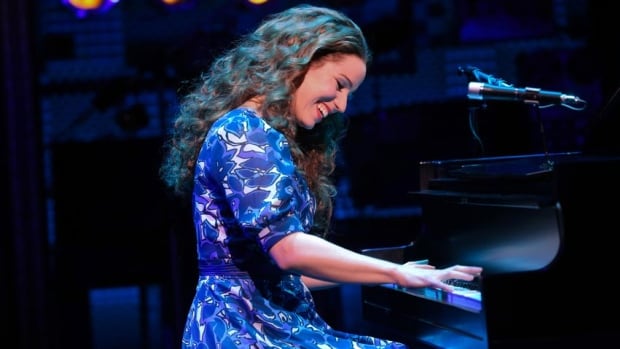 What a difference a year makes!  That’s an understatement for Canadian-born triple threat performer Chilina Kennedy who is currently starring on Broadway in “Beautiful:  The Carole King Musical.”

Last year, in November 2014, she was playing the lead role in Theatre Aquarius Hamilton’s sold-out production of the musical of “Mary Poppins.”  Now, just a little over a year later, on Dec. 6th, 2015, she performed centre stage in Washington as the Kennedy Centre honored Carole King herself, among others.  The tribute was telecast last week on Dec. 29th.

As well as leading the Broadway cast in scenes and songs from “Beautiful,” she shared the stage with a stellar array of talent including James Taylor, Sara Bareilles and Janelle Monae.  She even had the privilege of introducing the star.

In the finale “I Feel the Earth Move,” one of King’s greatest hits, she belted out with the ensemble a rocking rendition of King’s classic while standing centre stage right next to the legendary Aretha Franklin.  The indomitable Queen of Soul had just blown everyone away, including King herself, by accompanying herself on the piano … a rare sight … and singing “(You Make Me Feel Like) a Natural Woman” for the ages.  She even brought President Obama to tears.  It was a performance for the ages that flooded Youtube and Facebook for days after.

Franklin’s passionate rendition inspired the audience into a frenzy.  When she dropped her mink at the song’s climax, the cheering, screaming audience leapt to its feet in loving adoration.

(Sara Bareilles sang “You’ve Got a Friend,” James Taylor performed “Up on the Roof, Janelle Monae crooned “Will You Still Love Me Tomorrow” and sang the upbeat “One Fine Day while Chilina and her Canadian-born co-star Scott J. Campbell (Gerry Goffin), narrated and sang “So Far Away.”)

Not surprisingly, as Kennedy told her friends and family, “it was one of the best experiences of my life,” she shared with corktown.ca via e-mail.  Although she did not have a chance to say much to Aretha other than how wonderful she was, Chilina said, she got to meet and sing “with some of my great idols old and new.

“James Taylor and Aretha Franklin are greats in the music world,” she said, “and to share the stage with both of them was a dream come true. To honor Carole King in that way and to tell her own story was nerve wracking but incredibly beautiful.  And she couldn’t have been more generous and loving in her response both during the performance and after the show.”

The Kennedy Centre Honors is a special, annual, star-studded occasion during which leading performers from New York, Hollywood and international arts capitals salute Honorees who are seated with President and Mrs. Obama.

Performers narrate the stories of their careers in tributes and celebrate them in song and dance, most frequently through works they have written or with which they have been associated.

Chilina Kennedy will remember the event for a long time:  “I did get to speak with Carole King at dinner at the Kennedy Center after the show and, as always, she was so kind and generous.  She really is an incredibly down-to-earth and gracious woman.

“Backstage before the show and during rehearsal, I had a chance to chat with James Taylor and Sara Bareilles, who were both very warm and friendly.  Back at our hotel after the event, I had a wonderful conversation with Carole and Gerry (Goffin’s) lovely and talented daughter Louise Goffin.”

Born in New Brunswick, Kennedy is a graduate of Oakville’s Sheridan College and is a veteran of Canadian theatre including the Shaw and Stratford Festivals.  She made her Broadway debut as Mary Magdalene in Stratford’s production of “Jesus Christ Superstar.”

This March 7th, Chilina will celebrate her first anniversary playing Carole King in “Beautiful at the Stephen Sondheim Theatre located at 124 W. 43rd St. (between Broadway and 6th Ave.)

Her plans for the future?  “I’m not at liberty to say much about my future with the show,” she said, “but it’s safe to say I’ll be with the Broadway company for a while.  This is the role of a lifetime and I couldn’t be happier to play Carole every night with such a generous and talented group of actors.”

This March 15th through 20th, the tour will play Shea’s Performing Arts Centre in Buffalo.  A Toronto engagement has not been announced.

Chilina Kennedy’s solo folk-pop CD “What You Find In a Bottle,” arranged and produced by Rick Fox, is available at Song & Script as are the songbook and original Broadway cast CD for “Beautiful:  The Carole King Musical.”

The Charlottetown Festival original cast CD of the 2013 musical “Evangeline,” in which Chilina created the leading role, is also available.