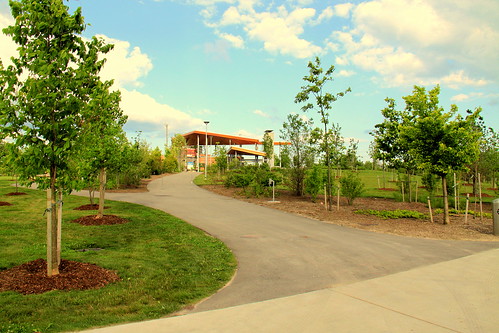 COMMONLY CORKTOWN: After spending a couple of months fenced-off as part of the Toronto 2015 Pan Am/ParaPan Am Athletes’ Village, Corktown Common is once again open to the public. Enjoy it today! Photo by wyliepoon.

CORKTOWN COMMON IS OPEN: As we reported on Twitter last week, Corktown Common is once again OPEN TO THE PUBLIC. TO2015 organizers kept their promise to us and opened the park ahead of schedule. Thanks to them for working so hard to make that happen.

There may still be some remaining fences and barriers waiting for removal, but the park is fully open. In fact, with the wet side open, this is the first time all of Corktown Common has ever been open to the public. Enjoy it!

MAKING AN IMPACT: BlogTO has some details on the ambitious plans for Impact Kitchen, the new restaurant opening in September at the corner of King East & St. Lawrence. We’ll let you know when the doors are open.

CORKTOWN MEDICAL: Speaking of new things in Corktown, we’re happy to welcome Corktown Medical to the community. They just opened on August 19. They’re a family practice and walk-in clinic located at 589 King Street East, next door to Health Shield Pharmacy.

LIVE MUSIC: These may be the dog days of summer, but there’s still some live music to take in this week.

On Wednesday, August 26, catch artist Patrick Brealey in the Distillery District’s Trinity Square between 6 and 8 p.m. Click here for details.

Then, on Friday, August 28, White Elephant has Sean Pinchin from 7 to 10 p.m. View the White Elephant’s event calendar for more upcoming shows.

ADVERTISE WITH US: With the summer coming to a close, a reminder that advertising opportunities for Corktown businesses are available. For just $25, you can sponsor an issue of this fine e-newsletter, read each week by almost 500 attractive and talented Corktown residents.

THE CORKTOWN NEWS: Keep an eye on your mailbox! Copies of the Corktown News — our revamped and reloaded version of the Corktowner newsletter — are currently being delivered throughout the neighbourhood.