SUMMER IN THE CITY: A shot from this past Saturday’s PAN AM POP-UP PARK held at Queen & River Street. The pop-up park was put together by The People’s Queen Street and #LivingToronto. Photo by Edward Nixon.

Corktown eNewsletter for the week of July 20, 2015

PANAMANIA: You’ve got a week left to enjoy the sights and sounds of PANAMANIA in the Distillery District! This week will see another great line-up of concerts designed to get you feeling the Pan Am spirit. Click here for the full list.

Her parents, family and friends — even her first swimming coach in Markham — joined her at Fusilli to celebrate.

Before Fusilli, a silver.  After Fusilli, a Gold and Silver. Fusilli: the Pasta of Champions…

Fusilli is serving up great food at 531 Queen East – stop on by for the full championship experience.

MOVIES UNDER THE STARS: Our friends at the Regent Park Film Festival are offering Movies Under the Stars in the Big Park in Regent Park all summer long. This Tuesday, July 22, they’re playing BEND IT LIKE BECKHAM. The festivities start at 7:30 p.m. with pre-show soccer and park games. Click here for details. 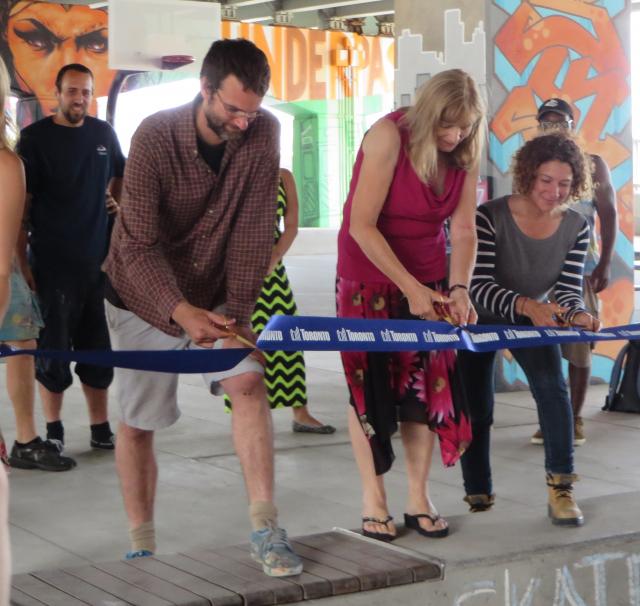 ARTY UNDERPASS PARK: Reps from your CRBA were on hand to celebrate the official unveiling of the new public art mural in Underpass Park on July 14. Urban Toronto has details on the great milestone event.

Also, we neglected to mention this in last week’s newsletter, but in case you haven’t yet noticed, the western half of Underpass Park — which has long been fenced off — is now open. Enjoy it!

WEST DON LANDS PUBLIC ART STRATEGY: Over at their blog, Waterfront Toronto has a great rundown of the art projects installed and/or planned for the West Don Lands area. Lots of great pictures.

THE POSTMAN WALKS: Over at songandscript.ca, Corktowner Dennis Kucherawy reviews one of the hottest Panamania tickets: The Postman, a theatrical production telling the story of Toronto’s first black postman. Dennis also looks at the career and work of David Ferry, who directed and conceived the play.

This weekend: Vivacity 6.0 + Regent Park Sunday in the Park