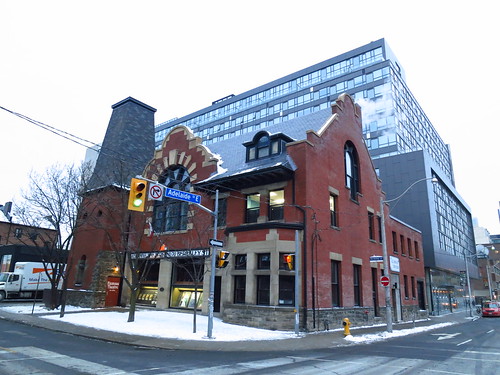 Corktown resident Ann Summers Dossena was recently the recipient of a great honour in New York. Ann, who founded Toronto’s International Resource Centre for Performing Artists, was given an International Citation of Merit at the 66th annual New York congress of the International Society for the Performing Arts. The Bulletin has the full story. A huge congratulations to Ann for a great achievement and the work she does.

Last week Urban Toronto took a look at the evolving face of Richmond Street & Sherbourne Street, from its days as a gas station and a popular restaurant through the construction of the Modern condo that now sits on the site. It’s amazing how fast things change.

Pam McConnell has posted her Winter newsletter online, for anyone who didn’t receive it in their mailbox. Take a look for details on local construction projects and other happenings.

For those interested in the ongoing issue of island airport expansion, the city has announced the next public consolation meeting. It’ll take place on January 27 at 6:30 p.m in City Council Chambers at City Hall. Mark your calendars.

The Globe & Mail has named one of the loft units at 90 Sumach as their Home of the Week. Pretty snazzy.

On Thursday, January 23, check out IDIOT’S DELIGHT at the Young Centre for the Performing Arts. It’s a “mad-cap romance” that chronicles what happens when a “cast of wonderfully eccentric and international guests – countesses, arms dealers, showgirls, revolutionaries, charlatans and lovers – spend a fateful weekend in a resort hotel in the Italian Alps.” It runs through March 1. You can buy tickets online.

And definitely don’t miss your chance to see the new show debuting at Corktown’s Alumnae Theatre. Opening on Friday, January 24, THE LADY’S NOT FOR BURNING is a “romantic comedy about witch-burning, arranged marriage and a soldier who wants to die in 1400s England.” Directed by Jane Carnwath and based on the acclaimed script written in 1949 by Christopher Fry, the show runs through February 8. Find ticket details online.

On Saturday, January 25, the Toronto Film Noir Syndicate continues their new season of Film Fatale favourites with classic Sinatra-starrer THE MAN WITH THE GOLDEN ARM. The film screens at 7:30 p.m. at Dominion on Queen (500 Queen East, at Sumach) with tickets just five bucks at the door. Don’t miss it.