Tell the city we want more BIXI in Corktown! 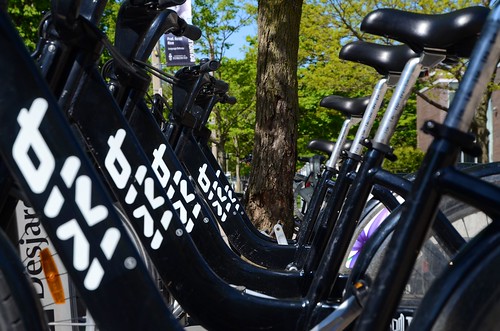 A message from our friends at Cycle Toronto:

Last week, the City announced that it had bought out BIXI Toronto’s capital loan, taking ownership of the program, and had vested the program with the Toronto Parking Authority. The move puts our bike sharing program on a solid financial footing. We worked hard throughout the year to build support for this and we couldn’t be more thrilled about it!
Excitingly, the City also plans to expand the system. Next year, the City plans to add 22 stations.
Where do you want to see the new 22 stations placed?  We’ve launched an online crowdsourcing tool that enables you to select locations and vote on your favorites.
Go to www.wewantmorebixi.to before Friday December 13 at 12:00noon to have your say. We plan to foward results to the City soon after that!

Corktown could definitely use some BIXI stations, so be sure to add your voice for Corktown stations at wewantmorebixi.to!
Photo by Kevin Zolkiewicz.
Announcements

eNewsletter: Pillar Celebration, YMCA Green Roof and Thanks for Cheering!!