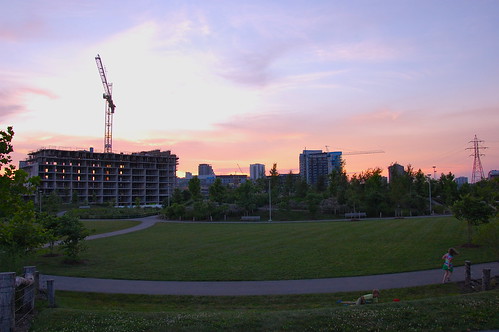 BEFORE SUNSET: The view of the changing neighbourhood from Corktown Common. Photo by Eric Sehr.

Urban Toronto has posted another photo update on the River City project in Corktown. They note that a crane has gone up for phase two of the project, which is set to be three 12 storey-mini towers. Of future phases — there are four in total — they point to rumours that phase three, which will be built to the south of Eastern Avenue, may start construction later this year.

Drivers likely noticed more lane closures on the Gardiner Expressway between Jarvis and the DVP over the last week. They’ll be in effect until at least December, with more construction work stretching through 2014. The National Post has some more detail on the work being done.

Waterfront Toronto has published their July 2013 newsletter, which — as always — gives a great overview on all their projects. Give it a read.

Lastly, BlogTO has done a great job curating some archival photos of Parliament Street, which include some good shots of the Distillery and the Consumers Gas lands. Take a virtual walk down memory lane.

On Tuesday, July 30, our friends across the river are set to hold their monthly Riverside Talks event at An Sibin Pub. (709 Queen Street East) Visit the Riverside BIA website for the details.

Starting Saturday, August 3 and running all weekend long, Artfest returns to the Distillery for the long weekend with “hand made Canadian pottery, glass, leather, jewellery, gourmet food, textiles paintings, live music  and more.” Admission is free, with the show running from 11 a.m. to 6 p.m. daily. Visit the website for more details.

On Saturday, August 3, the renowned East End Comedy Revue hits the Dominion on Queen with a fantastic line-up of funny talent. Derek Edwards, a national touring artist who has appeared on CTV’s Comedy Now! and at the Montreal Just for Laughs Festival, will headline along with comedians Aaron Berg, Ali Hassan and Michelle Shaughnessy. Doors open at 8:30. Tickets are $20 or $60 for a four pack. Buy ’em online.

On Sunday, August 4, the Daniels Spectrum in Regent Park will play host to an evening of  Carribbean Jazz and Folk, featuring Etienne Charles. Proceeds from the show will go toward the Muhtadi International Drumming Festival. Tickets are just $40 in advance — find all the details online.

Got a story about something happening in Corktown? Email website@corktown.ca.

Float Your Way to The Corktown Public Meeting on May 7th

Float Your Way to The Corktown Public Meeting on May 7th