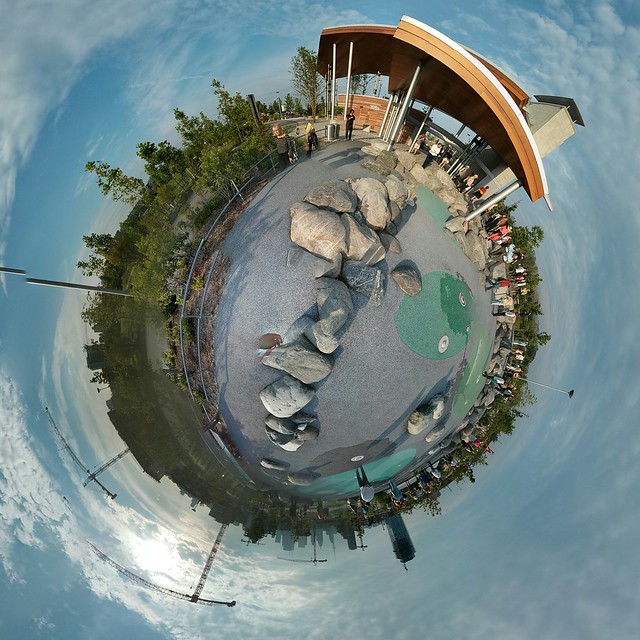 YOU WANT TO SEE WHATEVER COMMON PEOPLE SEE: A roundabout view of the new Corktown Common pavilion, the park that has put Corktown on the map. Photo by Park People Toronto.

The opening of our new neighbourhood park Corktown Common is clearly the hot story of the summer. CTV Toronto ran a piece talking up the park, which includes an interview with our own CRBA Prez Kara Isert. They aired a great TV segment highlighting the park as well.

The Globe & Mail also got in on the Corktown Common action, writing about how the park doesn’t just look pretty — it also serves to help protect Corktown from flooding.

Speaking of flooding, we hope everybody weathered last night’s megastorm okay. Our neighbours at 510 King Street East had some flooding issues in their parking garage, which the Toronto Star captured on video here. All the best to those dealing with soggy cars and storage lockers.

For BlogTO, Sarah Ratchford took a visit to Prologue Lifestyle — Corktown’s newest spa at the corner of King Street East and Parliament Street. Of the experience, she says, “the menu provides all of the essential spa services, and they treat clients pretty perfectly from what I can see.” Visit Prologue’s website for more information on all they offer.

Ratchford also took a look at Switchback, the new bicycle shop over in Riverside, and discovers that it’s the perfect place to get a bike or accessories for commuting on two wheels. They also offer all variety of repairs and tune-ups. Switchback Cyclery is at 651 Queen Street East.

A couple of new shows have just hit the stage at the Young Centre for the Performing Arts in the Distillery District, both by the excellently creative group at Soulpepper. First, there’s Entertaining Mr. Sloan, running from now through to August 17. It’s for mature audiences. They’ve also got a production of the classic Great Expectations running through August 17, as well. You can get tickets for both shows online.

On Wednesday, July 10, residents across Toronto are invited to join the mayor and other officials to celebrate the two-year countdown to the Toronto 2015 Pan Am/ParaPan Am Games. The event will be held at Commerce Court at King Street and Bay Street downtown, and will include sports demonstrations, autograph signing and music.

And all week long, don’t forget that it’s now Toronto Fringe season. See their website for a full line-up of shows, but one of the highlights is sure to be SOUR GRAPES, “a dark new comedy written by Allan Turner (otherwise known as Mullet, Toronto’s hit zombie clown), based on his experiences as a suicide survivor.” It features Corktown resident Chloe Payne in a leading role. You can grab tickets via Allan Turner’s website for shows Tuesday, Thursday, Friday and Saturday.

Got a story about what’s going on in Corktown? Email website@corktown.ca.