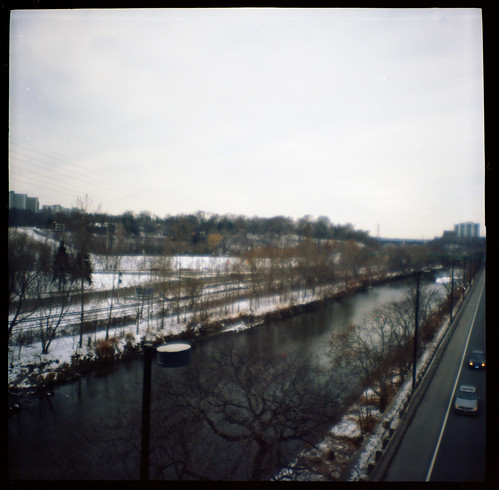 ICY RIVER, I SEE: A winter shot of the Don River. Photo by Tyler Wilson.

The news for Corktown for the week of February 25

First up, the organizers behind the Toronto 2015 Pan-Am/ParaPan-Am Games have posted a whole whack of internship opportunities. They’re a great chance to get some work experience and play a role in what should be a very exciting event for Corktown and Toronto as a whole. You can view the list of available openings online.

Urban Toronto brings us an update on the new building going up on the east side of Parliament Street, just south of Front Street East. The new development, which has just started construction, will house a fancy data centre. The building was originally planned to go on the First Parliament Site across the street, but instead the landowner was part of a land swap that put the historic site back in public hands.

All signs point to a new restaurant coming to the neighbourhood at 364 Queen Street East, the former site of the Federal Mattress Company. There are signs in the window indicating that Que Supper Club will be opening soon. It looks to be another great addition to Queen Street East.

Toronto Photographer Michelle Hotchin has posted a great set of Corktown photos to Flickr — lots of favourite neighbourhood locations are included. Worth a look!

At the Young Centre for the Performing Arts, check out pomme is french for apple, which is set to appear on stage starting this week for a limited run. The production —  “a fresh, funny, and irreverent look at womanhood in all its glory: its perils, its pleasures and all kinds of madness in between” — won the Best of Fringe award at the 2012 Toronto Fringe Festival. Tickets run for between $15 and $30 and you can grab them online. First performance is Thursday night.

Also on Thursday, the Daniels Spectrum in Regent Park plays host to ACCESS, an evening in support of the Arts Access Fund. The fundraising event promises lots of great performances from some of Toronto’s most creative people. Get tickets online. Doors open at 7 p.m.

Even more theatre! On Friday, March 1 and Saturday, March 2, the Extension Room performance space plays host to the Against the Grain Theatre as they present Kafka/Janáček/Kurtág. It promises to be “an intense and inspired evening of philosophy, love and scribbling.” Tickets go for only $30 – buy online.

On Saturday, March 2 at the Dominion on Queen, the Toronto Film Noir Syndicate returns with a screening of the 1947 rarely-seen classic Nightmare Alley. Those are the worst kinds of alleys. Getting it will only cost you five bucks at the door. Find more details at TFNS’ website.

Music in the Park at Little Trinity, Thursday nights this summer!
Announcements, Events

Music in the Park at Little Trinity, Thursday nights this summer!