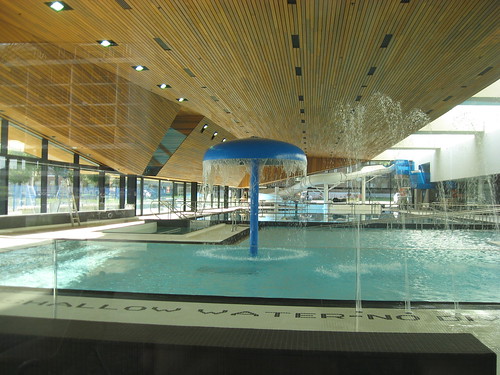 REGENT PARK GOING SWIMMINGLY: An inside look at the new Regent Park Aquatic Centre, set to open in October. Photo by Meteor54.

Good news for Corktowners looking for a place to take a dip. The Globe & Mail’s Lisa Rochon has taken a look at the new Regent Park Aquatic Centre and she really really likes it. “Instantly magnetic and powerfully sculpted,” she writes. “There’s pure design joy to be found at the Regent Park Aquatic Centre.” The Centre is at Dundas & Sackville and will open in October. Admission will cost $5.50 for families or three bucks per adult.

Speaking of Regent Park, Torontoist has a good look at the new Arts & Cultural Centre as well. It’s multi-coloured.

Further south, Urban Toronto takes a look at the new George Brown College campus on the waterfront. The fast-growing college  will open their first-ever residence as part of the West Don Lands development.

Just across the river, Councillor Paula Fletcher opened the newly expanded Joel Weeks park this past weekend on Carroll Street. With a neat playground and a sizeable water feature, it’s worth a visit with the kids.

On Tuesday, September 18, rapper Masia One is launching her new LP at Magic Oven, 360 Queen Street East. There will be a live performance and, presumably, pizza.

Kicking off September 20 at the Berkeley Street Theatre is “Proud”, a new political satire by Michael Healey. Per the plot summary, it’s about what happens when “a Canadian Prime Minister attempts to move the country slightly right of centre after decades of centre-left government.” Sounds scary. Tickets range from $30 to $45 and are available online.

Remember that this Saturday, September 22 is the date for the Corktown neighbourhood clean-up. There’s free pizza in it for you.

And cap off your weekend with Music in the Park at Little Trinity Church. Immediately following their Sunday morning service, the church will be providing an opportunity to hear some live music and connect with the church community.

Further afield, but I was sad to learn that UpsideDive, that cool shop that carried previously-loved goods at 269 Queen Street East, is closing their physical location at the end of the month. Their building, apparently, is scheduled for demolition, which is as good a reason to close as any. They’ll continue to operate their online shop. On the upside—no pun intended—they’re offering a major closing sale, with most items 20-30% off, or more. Check ’em out while you still can.

Lastly, starting next Monday, 504 King streetcars will be diverting around King Sreet in Corktown, following a route on Queen via Parliament. The TTC has the full details. Sadly, normal service won’t resume until 2013.