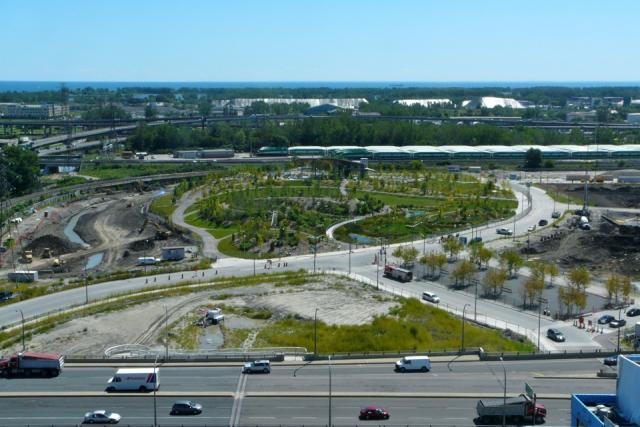 OASIS IN THE CITY: A tantalizing look at the new Don River Park from up high at the River City construction site. The park will open next spring. Photo by Craig White/Urban Toronto.

On September 10 — tonight! — the City is holding an open house on the proposed new heritage policies set to become part of Toronto’s new Official Plan. The session starts at 6:30 p.m. at Metro Hall. With the many beautiful and historic buildings in Corktown, this is something we need to watch closely.

Councillor Paula Fletcher, of nearby Ward 30, is holding a public meeting on the revised plan for the port lands this Wednesday, September 12 at the Frankland Community Centre (at 816 Logan Avenue). It’s an excellent opportunity to voice any feedback you have about the plan before it goes to City Council on October 2. You can download the final port lands report here.

Speaking of City Hall-related things, the Toronto & East York Community Council meets on Tuesday. They’ll be considering a change to permit parking on Shuter Street — read all about it here.

On Thursday, the Corkin Gallery in the Distillery District is holding an opening reception for David Urban’s “The Eye as Dove.” It’ll run from 5 to 8 p.m.

Quiet North Yoga has returned to the Distillery District for a run of classes on Saturdays through November. They’re holding a series of 10:45 a.m. workshops, each on a different theme. Find them in the Dancemakers’ Studio near Balzac’s Coffee. You can buy passes online.

Feral Kittens need love too. The Percy Street B&B has been taking care of the feral cat colony behind their home for several years. They need your help finding homes for some of the kittens they just caught. Here’s an incredibly cute video to tempt you. Email Kali if you’re interested.

Speaking of the Percy Street Bed & Breakfast, locals may not know that they offer a beautiful space for out-of-town guests. Rates are reasonable. Visit their website for more information.

Last week, Waterfront Toronto and Dundee Kilmer took media on a hard-hat tour of the Canary District project currently under construction in the West Don Lands. Both BlogTO and Urban Toronto have detailed reports with photos.

Urban Toronto also has a look at the new Italinteriors building going up at 445 King Street East. They’ve even got a rendering for those curious to see how things will develop.

The Globe & Mail’s Home of the Week last week was, once again, a gem from Corktown.

And, to end on a slightly dour note, remember that, as of today, the Jarvis Street off-ramp is closed for six weeks.