Neighbourhood news is a regular feature spotlighting all that’s happening in and around Corktown. 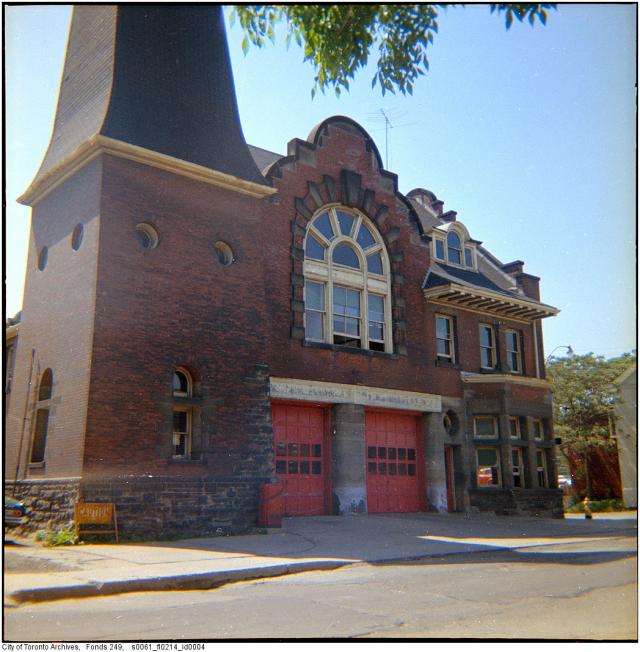 LAST DAY AT THE FIREHALL: A Toronto Archives photo of the old Berkeley Street Firehall in 1970. Check out the Then & Now feature at Urban Toronto to see how it looks today. Photo courtesy Toronto Archives.

Start your week off right by joining Councillor Pam McConnell for a walking tour of Regent Park and the surrounding area on Tuesday, July 10. The walkabout will include stops in the West Don Lands and Corktown. It’s a great opportunity to get to know the area and your neighbours. Those interested should meet at the Regent Park Presentation Centre (500 Dundas St E) at 6 p.m. And be sure to join CRBA members at the Dominion on Queen (Queen & Sumach) for a drink afterwards.

July 10 also marks Pan Am/Parapan Am Day in Toronto, which will kick off the official countdown to the 2015 Games, of which Corktown will be a significant part. The day will be marked with a flag-raising celebration at Nathan Philips Square and a concert at David Pecault Square.

Celebrate Friday the 13th appropriately by taking in some comedy at the Dominion on Queen (Queen E & Sumach) as they present Shock Therapy: Comedy at its most honest. Tickets are $10 in advance or $15 at the door. The show starts at 8 p.m.

The Young Centre for the Performing Arts in the Distillery District mounts a fitting summer performance of Neil Simon’s Sunshine Boys starting on July 14. Catch an early bird performance before the official opening night on July 26.

If you’re looking to get some weekend exercise, the Extension Room at Eastern & Trinity is holding a “Solo Sexy Movement” class at 3:30 p.m. on Saturday, July 14. The dance class promises to help participants “learn choreographies that help you shake what your mama gave you in traditional jazz form.” Check out their Facebook page for more details.

The Corktown Chamber Orchestra, who rehearse every Tuesday at Little Trinity Church, are seeking new members who play the violin, viola or cello. Get in touch with them if you’re interested in joining the group. In their own words, they’re “serious, yet light-hearted. Focused, yet funky.”

In the news: BlogTO’s Ben Johnson has a look at the history of breweries in Corktown. A fun glimpse at the neighbourhood’s appropriately boozy past.

In the Globe & Mail, Shelley White looks at the construction of the Pan Am Games athletes’ village and plans for the Canary District development: “Creating a successful neighbourhood from nothing is no small feat, but with a commitment to mid-rise, mixed-use development, ample recreational space and a progressive private-public funding model, the players involved hope they will create a community that works.”

In some stories relating to Regent Park development, Inside Toronto‘s Justin Skinner looks at the new Daniels Centre for Learning, which is the new location of the School for Social Entrepreneurs. Skinner also has news about a recent funding commitment from the Hockey Canada Foundation and Maple Leaf Sports & Entertainment made toward refurbishing the ice rink at Sumach & Shuter. We’re excited to follow that story.

The Town Crier‘s Omar Molesh has an update on the Real Jerk, and their sojourn west to a new location just outside Corktown’s borders.

And, lastly, of interest to some of the business owners in Corktown: a look at a movement from Leslieville merchants to set up their own BIA.

Got a story for Neighbourhood News? Contact Matt Elliott.